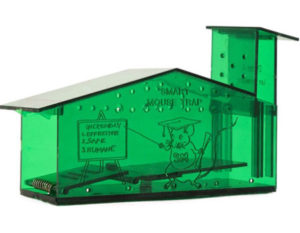 For over a century mouse traps have been designed to not only capture mice but also kill them. Some people even prefer to avoid the trap altogether and go for a poison to kill the mice instead.But what if you want to get rid of mice without killing them?

Humane “no kill” mouse traps are becoming more common, and one of the premier humane traps on the market is the Smart Mouse Trap by Seabright Labs.

Description – How It Works

This trap is very simple , but don’t let that fool you. It works.

Bait is placed in a small compartment on one end, with open holes facing towards the inside of the trap. This lures the mouse inside, where the smell is coming from. On its way in the mouse triggers a spring-loaded mechanism which closes the door and traps the mouse inside.

Once you have the mouse captured, you can take the entire trap outdoors and lift the food compartment to open the trap. Step away for a minute and the mouse will run out. This can all be done safely with no contact with the mouse or any droppings it may have left behind, so there is no chance of bites or risk of disease.

The trap can easily be cleaned and reset, for as many uses as you want.

There are a few features of this trap which I think make it stand out over other similar traps.

This is about as humane as a mouse trap can be. It inflicts absolutely no pain on the mouse. Even the trap door is not triggered until the ouse is near the far end of the trap, so its tail won’t get caught in it.

The only way that the mouse can be killed with this trap is if you don’t check it often enough, and leave the mouse in it for too long.

The mouse can’t get to the bait, and this is actually a good thing!

The recommended bait for this trap (or really any trap) is peanut butter, because mice love it. However, mice can actually choke on peanut butter since it’s so thick. If your goal is to keep the mouse alive, it’s a good thing that it can’t actually eat the peanut butter.

This Smart Mouse Trap is no genius, it does have some drawbacks.

Unless you get extremely lucky and a team of mice go in at once (nearly impossible), you will only catch one mouse at time.

For most homeowners this won’t be a problem, and it’s actually how most mouse traps work. It does limit you a little more than other extermination methods such as poison, which can get rid of virtually unlimited mice in a single application.

Compared to the classic “snap trap” this one is quite large. It’s even bigger than many other live capture traps, since the company decided to give it a sort of house shape with a triangular roof. I’m not sure why this is necessary, other than for pure aesthetic reasons.

The size of the trap may limit the places you can put it, but it shouldn’t he a huge factor. Really, even a large mouse trap isn’t enormous.

Reviews – What Others Are Saying & Final Verdict 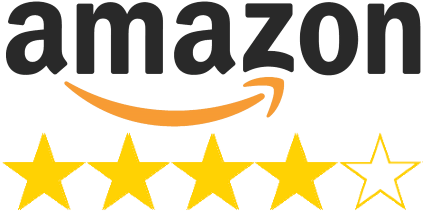 There are thousands(!) of reviews for this mouse trap online. The vast majority are on Amazon, but there are also many on other online retailers.

As of the time of writing this review the average Amazon.com score for the Smart Mouse Trap is 3.9 out of 5, with about 57% of the ratings being a perfect 5 stars.

Based on the reviews I can find, most people who have bought this trap say that it works great. I think that many of the poorly rated reviews can be attributed to the user using it incorrectly, such as putting the bait in the wrong spot, or not setting the spring-loaded mechanism correctly.

Most people found it easy to use, and were able to capture mice very quickly with it.

Here are some pieces of reviews that I find particularly insightful for this mouse trap.

The trap works great – I used wheat germ mixed with a dab of honey to bind the grains down the end of the trap and caught seven mice over three day period. The 2nd day out the trap caught two mice in a single trapping and they had ample room in this trap to move about and turn around. They even sat up and cleaned their little paws while they waited for their drive to the local forest park. – LMY “LMY” (SC)

I said that it was nearly impossible to catch 2 mice at a time, but this guy actually did it!

This mouse trap definitely works. I have a very smart and elusive mouse in my house and this trap caught him. We have watched him grow big and fat from eating all the food in our house. We originally purchased sticky traps, which we felt horrible about after catching a small mouse and decided to switch to the Smart Mouse trap. This is definitely a more humane way to catch a mouse. – Nicole Heavey

Although she was unhappy with other types of traps, this Smart Mouse Trap worked well for Nicole, and did not harm the mice.

We are in awe over how well this device works! In just 24 hours we have already caught 3 mice, and they all have happy new homes in the woods. My children race to check the traps each morning, who would have thought catching mice could be so much fun? I researched humane traps thoroughly, save yourself some time and just buy this one! – A. Neely

Not much I can add to this one, but this person obviously loves the trap!

Where To Buy (Best Price!)

You probably won’t find this mouse trap in stores (Walmart, Home Depot, etc.) which is inconvenient but not surprising, since it is made by a relatively small company.

With that being said, the best price you’re going to find is on Amazon.com. Even when you factor in shipping costs, it’s very cheap compared to other live capture traps.

Get The Smart Mouse Trap Now! 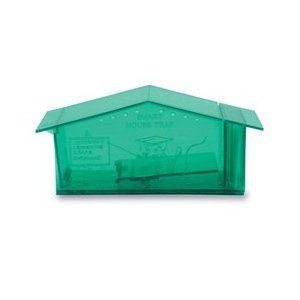 Click here to buy The Smart Mouse Trap at the current lowest price.