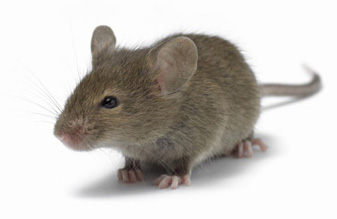 Appearance: Mice are small mammals of the order Rodentia, which is why they are commonly referred to as rodents. Adult house mice will have bodies that are approximately 7.5-10 cm in length, with a tail that is an additional 5-10 cm. Mice have hairy bodies, with the exception of the tail and ears, and are typically a brownish or grayish color.

Region & Habitat: House mice live throughout the world, with the exception of extreme polar and desert areas. This kind of mouse draws its name from the its tendency to live in close proximity to humans. This is mostly because of the food that is available wherever humans live, but also these mice are not native to many areas of the world and have not fully adapted to the outdoor climate.

Behavior: Mice are typically either nocturnal (awake at night) or crepuscular (awake at dawn and dusk), and spend about half the day sleeping. Males are territorial, and will defend their territory from other mice if necessary. Being omnivorous, mice will eat nearly anything but they prefer plat matter to other foods. House mice will generally live for about 2 years.

Why They Are Pests: Aside from being a nuisance and eating human foodstuffs, mice are capable of spreading diseases to humans. These diseases include lyme disease, salmonella, rickettsial, and many others.

How to Get Rid of Mice – Step-By-Step Guide – A general guide for how to get rid of a mouse infestation.
The Different Types Of Mouse Traps Explained – An overview of the various types of mouse traps, including the pros and cons of each.
4 Reasons Your Mouse Traps Aren’t Working, and How to Fix Them (+Bonus Tip!) – Mouse traps can be a very effective method of mouse control, but only if used properly!
What Is The Best Bait For Mouse Traps? – The best mouse trap in the world won’t do any good if the mouse never goes near it!
How To Use Peppermint Oil As Mouse Repellent – A non-lethal method of keeping mice out of your home.
Electronic Mouse Repellents – Do They Really Work? – The low down on the latest non-lethal mouse deterrents.
How to Get Rid Of Mice In Your Attic – How to get rid of the most pesky upstairs neighbors you’ve ever had!
How To Identify and Clean Mouse Droppings – Mouse droppings are often one of the first signs of an infestation.
How To Get Rid Of Mice In Your Crawl Space – Mice living below your house? Here’s how to get rid of them for good.
Boric Acid For Mice – Effective Or Waste Of Time? – A common household poison, but does it work on mice?
Can Mice Climb? – A look at how mice are able to get into those impossible-to-reach places.
Where Should Mouse Traps Be Placed? – Mouse traps can only be effective if there are in a place where mice will find them.
Smart Mouse Trap – Humane Mousetrap Review – A look at one of the most popular no-kill mouse traps on the market today.
Snap-E Mouse Trap Review – A modern take on the classic snap mouse trap.