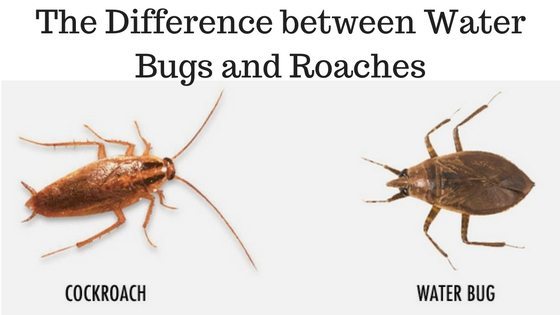 Since some cockroach and water bug species are quite similar in appearance, they are often mistaken for one another. As a matter of fact, these two insects are entirely different. Knowing how to distinguish one from the other is important, especially since the most efficient treatment option usually depends on the type of insect. Additionally, the techniques for controlling these two insects vary. Several considerations such as life cycles, diet, habitat, habits, appearance and even the danger each type poses are necessary to differentiate between a cockroach and a water bug.

Cockroach: At least 4,000 documented species of cockroaches exist on the planet today, all capable of living for an average of 2-4 years. Cockroaches prefer living in huge groups at all times. Cockroaches are not predatory and have in fact been described as non-aggressive.

Water bug: This insect is also known as the oriental cockroach or black beetle. At least 1500 species of black beetles exist worldwide, and the most common include giant water bugs, brown water bugs, electric light bug, and toe biter. Unlike cockroaches, black beetles are omnivorous or predatory scavengers equipped with piercing and sucking mouthparts. Although they may congregate during the breeding season, black beetles are more solitary.

Appearance and danger of bites

Cockroach: These non-aggressive insects vary in size from one species to the other. For instance, American cockroaches can grow to about two inches while full grown German roaches are about half an inch long. Compared to a water bug, an indoor cockroach is smaller in size. Although they do not bite, roaches can be a nuisance once they invade a home.

Water bug: In contrast to cockroaches, black beetles can bite people, often leaving a sore spot. The eastern toe-biter and backswimmer water bugs are known to attack bare feet underwater. These types of insects inject digestive juice and extract liquefied tissue. Black beetles are characterized by a much larger sheer size compared to the average cockroach.

Cockroach: As land insects, roaches prefer dark, vertical spaces slightly wider than their bodies. For these particular insects, kitchens and bathrooms are the most favored locations in a house. Since roaches are intolerant to cold temperatures, they prefer warm temperatures. As such, they usually take up indoor residence in basements, crawl spaces, cracks, and crevices. You can at times find cockroaches outdoors, but only when the weather is warm. As adaptive as they are, cockroaches are not aquatic even though they generally gather in warm, moist areas.

Water bug: As aquatic creatures, black beetles spend most of their lifetime in freshwater. These insects often hide and breed in moist and dark areas, and are sure to find the locations with leaky pipes or standing water. Since black beetles prefer humid, hot climates, they are quite common in the United States of America, often hiding in rotting wood, leaves, or around leaking faucets where they can enjoy a wet environment. Although they are aquatic, black beetles cannot breathe underwater and will always surface for air.

Cockroach: As scavengers, roaches eat any organic food source available such as bakery products, leather, glue, dry skin flakes, plants, fermented foods, and even dead or wounded animals. They can even feed on their own species.

Water bug: As predatory insects, black beetles prefer to hunt and kill their food, which generally includes minnows, tadpoles, and small fish. They also seem to like sweet-tasting foods such as syrup, foods rich in starch, and the algae commonly found on swimming pool floors. Black oriental cockroaches, a water bug species, can feed off decaying matter and garbage.

Cockroach: Roaches are classified as oviparous and ovoviviparous, all with a lifecycle that includes the egg, nymphal, and adult stages. Cockroaches enclose their eggs in cases known as ootheca. However, female oviparous roaches attach their ootheca onto their abdomens while the eggs of female ovoviviparous roaches remain inside their bodies once enclosed in the ootheca.

Water bug: The lifecycle of a black beetle involves the egg, larvae, and adult phases with all three stages taking a total of about 600 days. Female black beetles lay small, hardy, and oval shaped eggs about a week after hatching. These insects undergo several periods in the second phase of their lifecycle to accommodate their rapid growth. Although black beetles do not develop wings in the larvae stage, they are still considered predators by then. These insects grow wings and attain flight in the last stage of their lifecycle. The females have 13-14 body segments while the males have at least 19. As a result, adult male black beetles are significantly bigger in size. In most cases, black beetles lay their eggs in debris or on floating vegetation.

As much as determining the type of insect you are dealing with might seem like an impossible task, you will most likely find the difference between these two insects by performing some simple assessments.

• Although it might not seem like a very distinct difference to many people, the appearance of these two insects varies a lot. In addition to being larger in size than almost all cockroach species, black beetles generally tend to be black or very dark brown in color with paddle-like legs. On the other hand, cockroaches tend to be orange-brown in color.

Exclusion: The market is full of various practical solutions to the problem of an insect infestation such as traps, sprays, and powders. Each solution is capable of helping you when it comes to controlling cockroaches and black beetles.

Hire professionals: Sometimes, the do-it-yourself pest removal techniques fail. Hiring exterminators is the last and best solution when it comes to dealing with insect infestation issues.